Once known as Cape Comorin, Kanyakumari is the south most territorial dominion in the southern state of Tamil Nadu. Kanyakumari is many credits to its name in the state as the district is the second largest in Tamil Nadu in terms of population density and second most urbanized district following Chennai district. Also, it is important to note that the district of Kanyakumari is on top of the table when it is about literacy state in Tamil Nadu. The territorial dominion has wide-ranging geographic features with ocean on three sides and mountains abutting the northerly face. 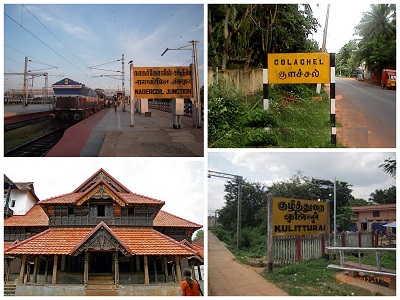 Kanyakumari is one among the important districts in the state that plays a crucial role in the economic system of Tamil Nadu. With productive agribusiness, fishery industries and booming tourism industry, Kanyakumari is one among the top economic contributors in the state. The region was a division of the princely state of Travancore during the colonial time period before getting merged to the Madras Presidency under recommendations from the States Reorganization Commission during the year 1956.

Nagercoil, also written as Nagarkovil is an important city, a municipality (urban administrative division) and the official central office of the district of Kanyakumari. Nagercoil is regarded as the most effectively managed municipality in the southern state of Tamil Nadu with a fully functional e-governance facility presented to the population. The city of Nagercoil is notable for the Liquid Propulsion Systems Centre (LPSC), a research and development facility operating under the renowned Indian Space Research Organization (ISRO).

The city is considered as an ideal place in the district for investment opportunities as fish net manufacturing, handloom weaving, rubber products, food processing units are some of the business sectors flourishing in Nagercoil. Also, the city is featuring the eminence of being the home of one of the two Sports Authority of India (SAI) Centers in Tamil Nadu, the other city being the state capital.

An established commercial centre operating under the administrative ambit Kuzhithurai municipality, Marthandam is an important town in the district of Kanyakumari. Fondly called as Thoduvetty by the local population, Marthandam is the second most prominent town following Nagercoil in the district.

The town is acknowledged for its lush appearance of flourishing vegetations on all sides and is notable for honey production, cashew nut processing and so on. The town of Marthandam has a railroad line linking Trivandrum and Kanyakumari and the name of the railway station is Kulitthurai (Marthandam) Railway Station - Station code: KZT. Marthandam also features excellent connectivity to Mumbai, Bangalore and Chennai by train and bus.

Colachel, also written as Kolachel is a second grade Municipal town located on the west seashore of Kanyakumari territorial dominion. Colachel is a historical port town that Vasco da Gama (the illustrious Portuguese explorer) addressed it as ‘Colachi’. Prior to the implementation of the States Reorganization Act during the year 1956, Colachel was a part of the Princely State of Travancore.

Colachel is an unavoidable name in the history of Kanyakumari district as the exact spot was the location of the combat between the Travancore forces and the Dutch East India Company forces during the year 1741. Colachel features excellent road connectivity to all parts of Tamil Nadu. The nearest airport to the Colachel town is Trivandrum International Airport (IATA: TRV, ICAO: VOTV).

Some of the other important localities and areas in Kanyakumari district include:

Comments / Discussion Board - Localities of Kanyakumari