Kanyakumari, formerly known as Cape Comorin is a territorial dominion and a distinctive urban centre located in the south most point of the mainland India in the southern state of Tamil Nadu. Kanyakumari district boasts a singular geographic feature that the district is bordered by ocean on three sides and mountain on the other. The unique topography of Kanyakumari is understandably reflected in the food culture of the region as the district is notable for a great deal of traditional dishes that are popularly called as Kanyakumari recipes by the Tamils all over the world.

Broadly speaking, food in Kanyakumari district simply showcases the culture and taste of the region. Rice is the most common staple food of the local population of Kanyakumari though a good number of people living in the mountainous areas have tapioca (starch extracted from Manioc (Manihot utilissima) as their primary food. The district's population is comprised of a considerable share of people who predominantly follow the non vegetarian diet. 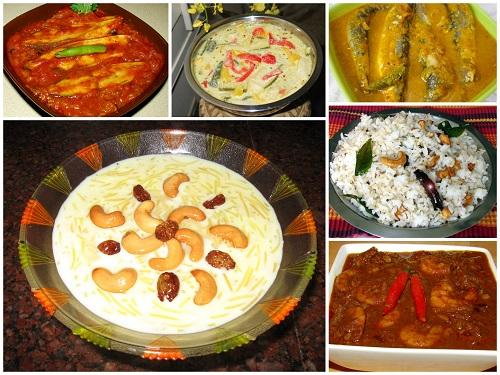 As Kanyakumari is regarded as a major fishery base in South India, seafood is very famous in this part of the country. Fish captured in the oceans around the territory are traded the next morning in the marketplaces around the district. Apart from the several traditional non vegetarian recipes, Kanyakumari does not fail the vegetarian buffs as delicacies like avial, kinnathappam, thengai saadham (coconut rice), theeyal, orotti will be a treat to their taste buds!

Furthermore, irrespective of vegetarian or non-vegetarian dishes, Food in Kanyakumari is spicy in general. The local population loves the lavish use of coconut as an important ingredient in most of the dishes prepared in the district. This might be an influence from the neighboring state as Kanyakumari is just 85 km away from Trivandrum - the capital city of the neighboring state of Kerala. On the whole, traditional recipes of Kanyakumari are truly delectable and people trying them once will definitely go for it once more!

Let's find out the secret behind some of the traditional dishes prepared in Kanyakumari district along with the ingredients.

Thengai Sadam (Coconut Rice):
A simple yet delicious dish that comes under the category of variety rice prepared in the district. Plain white rice is a given a delicate twist with lavish use of fresh coconut gratings seasoned with mustard, urad dal, cashew nut, asafetida, green or red chillies and curry leaves. Sometimes broken pappads are added for a flavour. Thengai sadam is usually served in plaintain leaves. The finished rice that come out with bewitching aroma and taste is nothing short of heaven!

Meen Kuzhambu (Fish Curry):
Meen Kuzhambu, a mouth watering traditional dish of Kanyakumari district where fish is cooked with either fresh coconut gratings or grinded coconut. Sometimes, sliced pieces of raw mango are added for a refreshing flavour. The traditional fish curry prepared in Kanyakumari is more or less similar to the ones prepared in the neighboring state of Kerala.

Avial:
Yet another pleasant-tasting stunner that is prepared with lavish use of coconut. The dish is usually prepared with a large variety of vegetables cooked with coconut and this particular dish will likely make the vegetarians go gaga over the aroma and taste.

Some of the other popular traditional dishes of Kanyakumari district include:

Eating Out Options in Kanyakumari

Kanyakumari district is the home of a lot of popular vegetarian, non-vegetarian and multi cuisine restaurants that serve a long menu that will definitely satisfy the local population and visitors. Palace Hotel located in the heart of the district is a big name and is famous for large varieties and taste. Multicuisine restaurants in Kanyakumari serve North Indian, South Indian, Chinese, Continental dishes to the customers.

Comments / Discussion Board - Food in Kanyakumari