Business and Economy of Kanyakumari

Kanyakumari district is the southernmost point of the mainland of the Indian subcontinent and the meeting point of three great seas, Indian Ocean, Arabian Sea and Bay of Bengal. The territorial dominion of Kanyakumari, formerly called as Cape Comorin is regarded as the second most urbanized district in the southern state of Tamil Nadu. 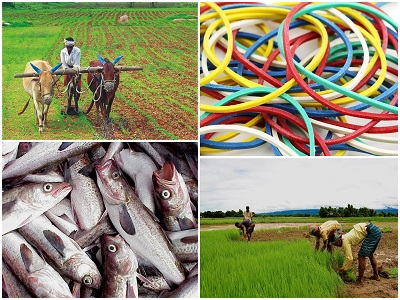 The district is looked at as flourishing city in terms of its contributions to the state economic system. Contrary to its position of being the second most urbanized territory in the state next only to Chennai, agribusiness in the district is the one among the most significant occupations of the population of Kanyakumari. Let’s find out some of the most important occupations of the people of Kanyakumari that gives credit to the notable economic development of Kanyakumari.

Thought the territorial dominion of Kanyakumari is looked at as a district that experiences a rapid climb in the list of most urbanized districts in the southern state of Tamil Nadu, it is substantial to acknowledge the fact that the considerable share of the population actively involves in agribusiness. As a matter of fact, agriculture and related lines of work is the heart and soul of societal growth of the district of Kanyakumari.

It is rather critical as it offers the livelihood for considerable share of the district's population and in point of fact it is highly adding to the state revenue. Also, it is important to note that agribusiness and irrigation arrangements in Kanyakumari ride the characteristics, configuration and evolution of land forms and rainwater handiness. As per the agriculture friendly climatic conditions and topographical considerations, the Kanyakumari district could be sorted out into three extensive parts and they are

Uplands:
Consisting of hills and hill footings appropriate for farming crops like Pineapple, Nutmeg, Cloves, Rubber, Pepper and so on

Lowlands
Consisting the coastal areas suitable for growing coconut tree, cashew tree and so on

Middle
Consisting of fields and vales suitable for growing cash crops that include Banana, Tapioca, Paddy and so on

Name and address of the Agricultural Research Stations in Kanyakumari District

No wonder that fishery in one among the most important economic contributor of the territorial dominion of Kanyakumari as the district is considered as the meeting of three great seas. The fishery line of work in the district extends an important role in the overall economic growth of the district. The plenteous fish biodiversity of the district proposes effective reach for fisheries development.

The fisheries line of work, which commenced merely as a subsistence support process during the early times is at present coming out as a critical sphere, adding to foreign exchange earnings and offering employment to a lot of people. As a matter of fact, Kanyakumari district houses almost forty villages engaged primarily in the fishery line of work.

There are almost five significant riverine ecosystems present in the district of Kanyakumari, which confluence with the Arabian Sea

Manakudy Estuary:
Shaped by the confluence of River Pazhayar (where several rivers merge) in between east and west Manakudy settlements

All the above estuaries are shaped by the drain of canal surplus waste during monsoon and the water ran out from the irrigation areas combining with the ocean.

Apart from Agriculture, Tourism and Fishery being the three major economic contributors of the district, Cottage industries also play a major role in the economic system of Kanyakumari. Also, there are many other good opportunities available for coir, wood and rubber industries if suitable infrastructure installations are put up to the interested people.

Comments / Discussion Board - Business and Economy of Kanyakumari