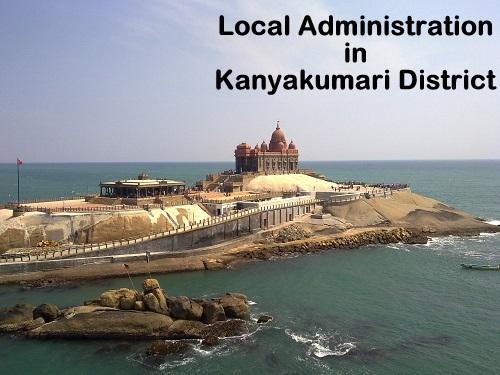 Following the judicial separation of the Kanyakumari district of the territorial dominions  transferred to the then Madras state (former state in the Republic of India) from the former United State of Travancore and Cochin during the year 1956, the administration frame of the local bodies then in existence were countenanced to proceed till 31st of March 1962. The Tamil Nadu Panchayats Act, 1958 was implemented in the Kanyakumari district effective from the 1st April 1962. A district collector was appointed to the district of Kanyakumari with the responsibility of heading the district.

The district collector of Kanyakumari receives petitions from the public on every Monday. The district collector along with the other supporting officers reviews the collected petitions on the same grievance day during the second half. The district administration ensures that no officeholder is permitted to keep back petitions pending for a period of more than thirty days. The received petitions are then circulated to the appropriate departments and most of the public grievances are addressed on the same day itself.

The mass contact programme is yet another responsible initiative that is directed by the district collector of Kanyakumari, the district revenue officer in every alternate calendar month. Petitions are collected from the public during the first phase of mass contact programme are circulated to the appropriate departments and replies or answers are usually given to the public  during the second phase of the programme.

Comments / Discussion Board - Administration in Kanyakumari