Kanyakumari, the southernmost point of the Indian peninsular mainland is a district that is situated in the southern state of Tamil Nadu. Kanyakumari district got its official name from the renowned 3000 year old Kumari Amman temple (devoted to Devi Kanya Kumari, i.e., the virgin goddess - an aspect of Parvathy) enshrined in the region. 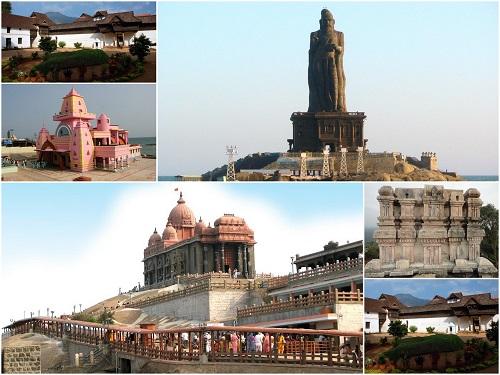 Kanyakumari has got a great deal of recognition to its name that the district is regarded as the most literate district in the southern state of Tamil Nadu. Besides, the district is considered as the second most urbanized territory in the southern state, succeeding only to Chennai and second most prominent zone in the state of Tamil Nadu in terms of population density. Kanyakumari district boasts singular and wide-ranging natural features with ocean on three sides and the mounts of the Western Ghats abutting the northerly face.


Past and Present of Kanyakumari

The geography of Claudius Ptolemy (a expert on geography, mathematics, uranologist, geographer, astrologist, and author of an exclusive quip in the Greek Anthology), distinguishes business dealings between western India and Alexandria which is considered as the second most prominent urban center and the second most magnanimous metropolitan region in Arab Republic of Egypt. Claudius Ptolemy described Kanyakumari along with the Gulf of Mannar as a heart for fishery where they fish for pearl oysters. The geographer also distinguishes Korkai, a locality to the east of Kanyakumari district, as a center of commercial exchange of pearl.

The present day Kanyakumari district comprises of a lot of regions which were under the domination of various ancient Tamil dynasties and other important kingdoms of our country. Some of the settlements include Cholapuram, Azhagiapaandipuram, Kulasekaram, Vilavancode, Kalkulam and Bhoothapandy reveal the influence of Chera, Cholas, Pandya dynasties in the region. During the period when the Tamil dunasty of Chola went down due to the rebel of Hoysala empire (was a prominent Southern Indian Kannadiga empire) and Western Chalukya Empire, the Venad Swarupam (Kingdom of Quilon) captains (posterity of the central Chera family line) capitalised and step by step launched their control on many regions in Nanjilnadu, present day Nagercoil town.

The region was further dominated by various other rulers before falling into the hands of the British whose control lasted till 1947. Starting from the year 1947 to 1956, Kanyakumari district was under the personal authority of Maharaja of Travancore (principal title of the ruler of the Kingdom of Travancore). The year 1956 holds great significance in the history of Kanyakumari as the functionary district of Kanyakumari was formed on 1st November 1956 with the four administrative taluks, namely, Vilavancode, Thovalai, Agasteeswarem and Kalkulam and integrated with the state of Tamil Nadu. Shri R .Thirumalai IAS was appointed as the first Collector of Kanyakumari district.


Geography and Climate of Kanyakumari

Kanyakumari district is regarded as the southern most district of Tamil Nadu with respect to geography. The district lies between at geographical co-ordinates between 77° 15' and 77° 36' of the eastern lines of longitude and 8° 03' and 8° 35' of the northern lines of latitude. Furthermore, Kanyakumari district is abutted by Tirunelveli (Nellai mavattam) on the east and north, Kerala state in the west and north west, Gulf of Mannar in the south east, Arabian Sea and Indian Ocean in the south and south west.

Kanyakumari district has an opportune agriculture friendly climatic condition. The reason being its close proximity to the equator (just 8 degrees away from the equator), unique configuration of surface and natural features and a few other factors, help the growing of assorted cash crops and food crops in the district. The rice paddy kinds grown in the first crop season in Vilavancode and Kalkulam taluks are grown in the second crop season in Agasteeswaram and Thovalai taluks. The paddy cultivation that takes place under widely varying conditions in Kanyakumari exposes the distinct variance in the climatic conditions the district goes through.

April to June: Kanyakumari experiences a very hot temperature that can extend to up to max 35°C
November to February: Kanyakumari stays coolest and the temperature oscillates around 21°C
Approximate yearly rainfall: 1188.6 mm
Best time to visit Kanyakumari: October and March 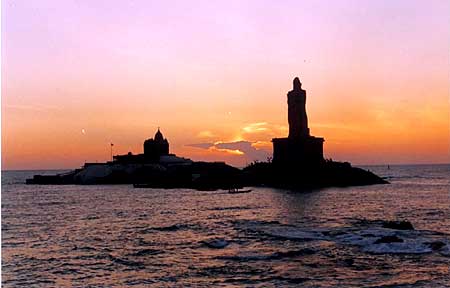 The south most tip of the mainland of Indian subcontinent, Kanyakumari district is an unmissable name of any South Indian tour itinerary. It is unusual that Kanyakumari although an integral part of the southern state of Tamil Nadu, the destination is almost all of the time considered in a lot of Kerala travel packages as well! Kanyakumari district presents a wide range of options for tourists that include beaches, churches, mosques, dams, waterfalls, monuments, amusement park, museums, temples and many other unique attractions.

The Government of Tamil Nadu has taken effective steps and followed through a lot of implementations to promote tourism in the district. A government report states that a total of 1,900,000 holidaymakers (national and international) traveled to Kanyakumari in 2007. What is more, Kanyakumari is specially popular for its dramatic and singular atmospheric phenomena of sunrise and sunset. Likewise, on full-moon nights which are widely called as Chitra Pournami in the local language of Tamil, visitors can also the moon rise and sundown at the same time which is most likely to struck the tourists in sheer awe!

Some of the most popular tourist attractions of Kanyakumari district include: 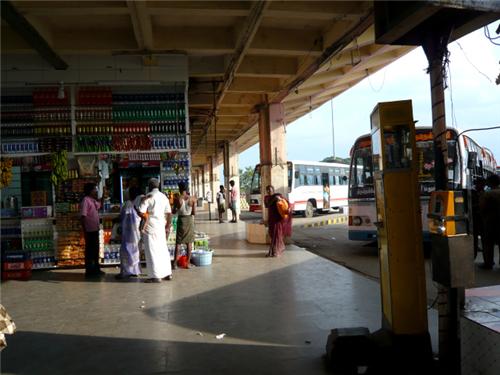 Kanyakumari is well connected by road, rail and air. Tourists can reach the pictureque location without much hassle as choosing the right mode of transportation that leads to Kanyakumari holds the key!

Local Transportation in Kanyakumari District:
Kanyakumari district has tours and travels companies and intercity trains, operating from almost all the cities of South India, that assure a comfortable and efficient transportation for both inter and intra district move around.

By Air:
The nearest airport from Kanyakumari district is located at Thiruvananthapuram which is about 57.8 km away. The Trivandrum International Airport (IATA: TRV, ICAO: VOTV) is well connected with important cities like Chennai, Bangalore, Mumbai, Cochin, Delhi by frequent flights.

By Rail:
Kanyakumari district is well connected by trains to all important cities of India. Express trains and super fast trains are regularly available from Kanyakumari railhead connecting various parts of the country which include Trivandrum, Mumbai, Jammu, Delhi, and Bangalore and so on.

Comments / Discussion Board - About Kanyakumari